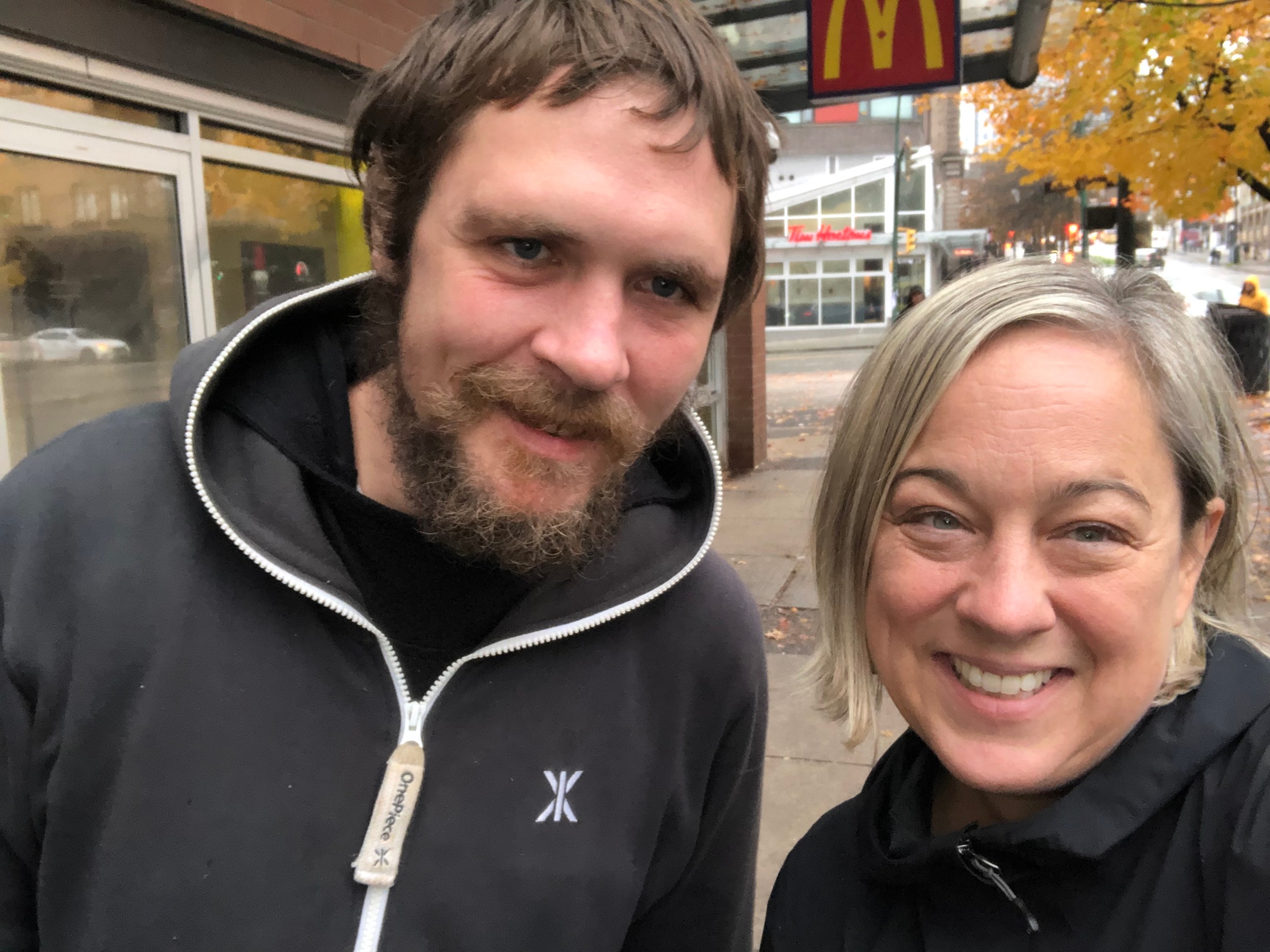 After a hard week both personally and professionally, I knew I would benefit from some time building connections on the Downtown Eastside. Hastings Street has a way of grounding me, instantly putting my problems into perspective and reminding me to live in the moment. In Vancouver’s darkest neighbourhood, time stands still. Perhaps it stems from the lack of technology, perhaps it’s the lack of urgency, or perhaps it’s the loneliness that hovers in the air just inches above our discarded citizens cast along city streets, waiting to be seen and understood.

Last night, I received an email letting me know that in early November, my dear friend Cindy found her boyfriend of over twenty years deceased in his apartment. With the cause of death still undetermined, I worried Cindy would spiral back into addiction. Ron’s death comes on the heels of Cindy’s father’s death and her eldest daughter’s death. Since our friendship began in 2013, Cindy has experienced a roller coaster of emotions reuniting with both of her daughters and grieving the loss of a parent, child and now, her partner. With Cindy’s cellphone no longer in service, I hoped I could find her to offer emotional support. When my high school friend Jacqueline asked if she could join me for a day of giving with her grade nine daughter and friend, I knew the timing was perfect. While our intent was to help others, I knew the day would help me just as much.

As we drove downtown, I spoke of the neighbourhood and how easy it is to find people willing to share their stories. The girls were nervous yet excited as they assembled candy bags to distribute to the homeless community (side note… I will gladly accept any donations of leftover Halloween for future trips). Within minutes of parking our car, we were engaging in lighthearted conversations with small groups of people huddled together in an attempt to stay warm. Sydney and Mahdiya received many thanks for their candy bags, and one gentleman took time to call out to Sydney that she should find a jacket so she could stay warm while helping. The polite, respectful and genuine conversation settled the girls nerves and reminded us all of the very basic human need for connection.

We decided to walk towards Cindy’s shelter hoping the staff could pass along our gifts. As we headed west on Hastings, a 6’3 man wearing a Helly Hansen onesie caught up to us and asked if we had anything to hand out.

He eagerly accepted some candy and began to chat. He quickly let us know he wasn’t from the Downtown Eastside – that he was initially from Texas but had hitchhiked North before covid.  He wanted to assure us that he never expected to be on the streets, but his addiction had a way of grasping hold of him and controlling his life. Noticing Daniel was open to sharing his story, we invited him to lunch at Tim Hortons. For the next six blocks he shared details of his life growing up in foster care and group homes with more moves than he could count, molested for six years from age 12-18. He listed off a series of traumatic events including assault, abuse and isolation. Born to a Canadian mother and dual citizenship father, he had spent time on both sides of the border never able to build the relationships he craved with family. When his mom died from MS eight years ago, he had only met her three times. His father physically assaulted his mother before he was born and never played a role in his life. Despite having a brother and a sister, they were never placed in the same foster homes so they grew up with limited ability to connect. A combination of trauma, anger and hurt left them estranged, though Daniel was eager to try again when we proposed the idea of making connections through social media. Within minutes we were able to share photos of both his siblings and send messages through Facebook (that have yet to be answered).

Daniel enjoyed a wrap, chili, bun and a diet coke and we genuinely enjoyed his company. Together we talked about sports, cooking and family. He laughed at my cooking stories and boasted about his own abilities after watching every episode of Rachel Ray. As a former basketball player he loves the LA Lakers. Mahdiya and Daniel compared basketball stories as student athletes. Daniel explained his phone had been stolen and the only clothes he has are the ones he was wearing. We complimented him on his XL onesie that kept him warm on the streets. He was proud of himself for finding this gem of an item at the local Value Village. He explained his current shelter does not open until 9:30 PM so the day would be long in Vancouver’s rain. He prefers the 24 hour shelter but is currently banned after engaging in a physical altercation where he admittedly reacted after being called a goof. With some shame he shared that his anger can get the best of him, reflecting on experiences being kicked out of his SRO housing and shelter and spending some time behind bars. We understood and spoke of the impact trauma can have on all of us.

Daniel loved that we were dedicating our day to helping others. He mentioned it was his 39th birthday and it was turning out to be a great day after participating in a meal program with his social worker in the morning (where they made blueberry pancakes) followed by our lunch together.  He took interest in our lives and laughed at our stories. As lunch came to an end, he asked if he could walk with us longer and help us hand out chocolate. As a diabetic he monitors his own sugar consumption. He shared his battles with our medical system often feeling judged by health care staff. He complimented the nurses at VGH who treated him with respect during a recent stay for a foot infection. He spoke of loss he had experienced having to turn his two year old daughter over to her maternal grandparents, fully aware he could not provide adequate care while being homeless.  He also made us laugh sharing stories of his life as a truck driver stopping at small town bars and meeting strangers for beer and conversation on his route delivering pigs from Alberta to a slaughter house in Langley. At one bar, a 65 year old gay man openly expressed interest. Daniel shared that he wasn’t gay but would love someone to talk to. The two men hung out for 72 hours while the pigs waited in the truck.

Daniel asked if we could buy him a pack of cigarettes for $5. He explained the black market cigarette system to us and let us know which corner had the cheapest prices (Abbott and Hastings). As our car was parked in that direction we continued to walk and build our connection. Daniel purchased his cigarettes for $5 cash and stopped with us on the street corner asking if we could hang out just a little longer so he had someone to talk to. As we stood together on the corner, Daniel’s loneliness almost palpable. Our departure would be one more loss in a long list of goodbyes. Just as the light was about to turn green, I peered up from my hooded rain jacket to make eye contact with the stranger beside me waiting for the light. Cindy. With thousands of people on the Downtown streets, Daniel had walked us right to my long lost friend.

Cindy and I hugged and cried, grieving the loss of Ron while also celebrating our friendship that always seems to bring us together at the right moments.  Daniel asked if we could all head to Starbucks in Gastown. He led the way as we shared photos, reminisced of the past, and spoke of Ron’s passing. After ordering some warm drinks, we said goodbye to Daniel who remained nestled in the corner of Starbucks with his hot coffee, offering a temporary escape from the rain. Despite his 6’3 stature, he resembled a young child slumped into his chair, clearly impacted by another goodbye.

Cindy walked us to my car sharing details of her new job selling cigarettes. We offered her our condolences and left her with some new warm clothing, PJ’s and a plant to put beside her bed. Drug and alcohol free, she vowed to keep in touch, and continued on through the downpour to her SRO housing.

As we drove away, Jacqueline, Sydney and Mahdiya marvelled at how easy it was to have conversation, how time stood still, and how obvious it was that people on the outskirts of society crave connection. Jacqueline reflected, “It really is that simple – we all just want to belong.”

“Every society says its outsiders are the problem.

One thought on “We All Want to Belong”