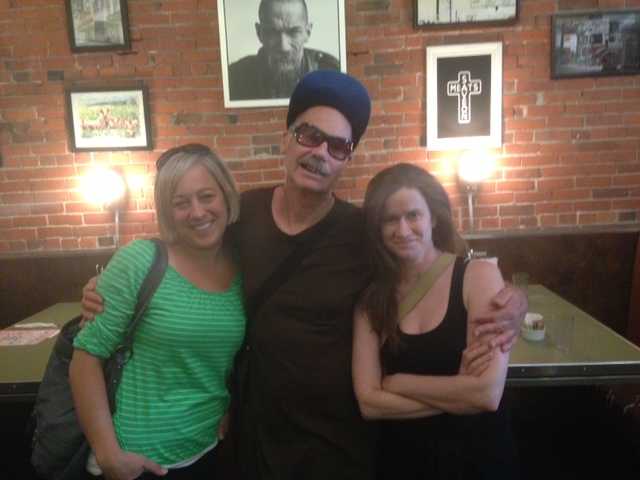 What if you were born with everything you had ever dreamt of? What if you had your health, your family, an abundance of money, a home overlooking Jericho beach on Vancouver’s Westside, and opportunity at your fingertips? Would you be happy? Would you have found what you are searching for? It’s a life most of us only dream of – it’s the reason we buy lottery tickets or tour the prize homes of million dollar lotteries. It’s a world we imagine where we would not have to worry about the rat race of life – a place where we believe we could find happiness. But what if you were given all of this as a child? Would it mean as much?

Meet Dougie, my newest friend from Vancouver’s Downtown Eastside. Like many I meet on the streets, Dougie defies conventional stereotypes. He has not been forgotten, he did not grow up in poverty, and he does not shoot up with needles. He chooses to seek solace in what most describe as Vancouver’s darkest neighbourhood. Perhaps it’s here that Dougie can rebel against society proving that money cannot buy happiness. Perhaps it’s here that Dougie can search for self acceptance, and carve out a life where he feels his sense of worth. Perhaps he escapes the judgment, the expectations and pressure to be someone others want him to be.

Dougie does not want self pity. He knows he has lived a life with opportunity afforded to few. He has travelled the world, attended a prestigious university, married, had a child, owned property and had an abundance of wealth at his finger tips. Despite living the dream, he openly admits his ex-wife was right – his first love is the bottle.

Today Dougie lives an eclectic life merging his riches from the past with his chosen poverties. He knows he does not have the ability to manage his own funds, and so instead he rents a room in Vancouver’s Eastside and has a relative act as power of attorney over his estate. On his modest income he spends his days eating healthy (juicing his own foods), reading for hours a day, and escaping from the world with his drug of choice: alcohol.

Unlike many of the DTES, Dougie doesn’t speak with resentment or hatred towards his family. He fondly remembers his ex-wife’s beauty and intelligence, and he beams with admiration of his daughter’s success and achievements. On a scale of 1-10, she is his 17. He makes it clear to us, it is of no fault to anyone but himself that his daughter does not talk to him anymore. His love for the bottle caused too much harm. And while Dougie keeps the conversation light and comical, you can see the tears surface quickly as he allows himself to feel the guilt that comes with destroying a family.

As we walk together down Hastings Street, cars race by, heading to the downtown core in search of success. To the passerby, Dougie is nothing but a drunk. But maybe Dougie has lived his life in reverse. Starting with everything, he now chooses to have nothing, and in his absence of stuff he speaks passionately about what really matters. For Dougie, everything is nothing, and nothing is everything.

And Dougie is finding his own way to happiness. Well read and able to quote practices from positive psychology, Dougie stands on Hastings street offering a blend of compliments and comedy to everyone who passes by. Local business owners and residents of the DTES neighbourhood smile as they pass by, knowing well that Dougie will brighten their day with jokes and witty sayings. In Dougie’s words, he is on an “all cheese diet”, one where he can make cheesy jokes for hours at a time, beginning most sentences with “hey let me tell you my favourite joke.” In fact, this is how we met Dougie. Shortly after parking our car, my friend Jenny and I made our way to Save On Meats. Like most people who have joined me to go “Beyond HELLO”, Jenny asked how we would choose someone to go for lunch. I told her my standard answer “we won’t find someone, they will find us”. Sure enough, minutes after parking the car, Dougie intercepted our walk to tell us that we were more gorgeous than Hillary Clinton and Jane Fonda (I should add that when he switched from sunglasses to reading glasses  at lunch he shouted out “Holy shit – you just got twice as big!”)

As we walked to the restaurant Dougie was proud to tell us his favourite jokes, yet aware enough to notice that a slightly overweight shy looking woman was passing us by. He stopped his jokes with a polite excuse me and shouted out to the girl “Hey – you are beautiful – don’t forget that!” She turned back with a slightly uncomfortable smile showing that she wished his words were true in her eyes. He quietly turned to us and said “I hate it when girls have low self worth!” For the next two hours Dougie entertained us with a blend of life stories, great jokes and his mantra “We are here for two reasons – we are here to achieve an abundance of love and an abundance of honesty – that’s it! An abundance of love and an abundance of honesty.”

As lunch came to an end, Dougie called over the waiter and asked if he would take a cheque… the waiter paused with thought… and Dougie chuckled and told him his cheque would bounce so hard it would break the window. He then broke into a comedic dance offering dance lessons to the adjacent table. Despite Dougie’s scattered blend of comedy and life lessons, there was an irony to Dougie. Often making fun of himself Dougie would like you to believe he is simple. And yet his knowledge of the world, impressive vocabulary, and understanding of everything from politics, literature, art, government and psychology makes me believe Dougie has a gifted mind.

I asked Dougie his favourite place he has travelled. He laughed and said “Main and Hastings”. Of course he is joking, but I wonder if perhaps this has some underlying truth as this is the corner that Dougie has found acceptance.

I then asked what he does not like about the neighbourhood. He looked at me with an answer suggesting the superficial nature of my question. “Other people search for happiness – I can see a thousand sunsets vividly when I close my eyes. I don’t need to go anywhere. If I have a loving thought – I’m grateful. If i have an honest thought – I’m grateful. And hey – if I have an intelligent thought? I’m surprised!”

Lunch with Dougie was fun. He kept us laughing, he kept us entertained, and we became friends. In just two hours we went Beyond HELLO, and heard a story worth hearing. Between Dougie’s jokes, he took some risks, and together we sent a message of love to his daughter in Ottawa. Dougie paused long enough to show we understood him when Jenny asked the hard question of why he did not accept himself. And when we said goodbye, and Dougie joked about bringing us both back to his room, there was a loneliness that hung in the air giving us a glimpse into Dougie’s search for happiness.

One day later, looking back, I realize Dougie offered us more than we gave him.

An abundance of love – an abundance of honesty. Maybe that’s what we should all be searching for. When we can go to sleep at night, able to love ourselves, then maybe we have found happiness. Maybe that is the true essence of success. 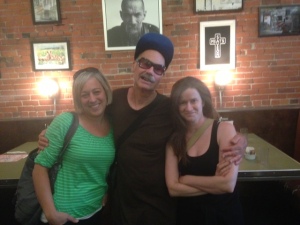 How did the Pillsbury Dough boy win an academy award?    Best supporting actor in a dinner-roll…

7 thoughts on “Searching for Happiness: A life lived in reverse.”