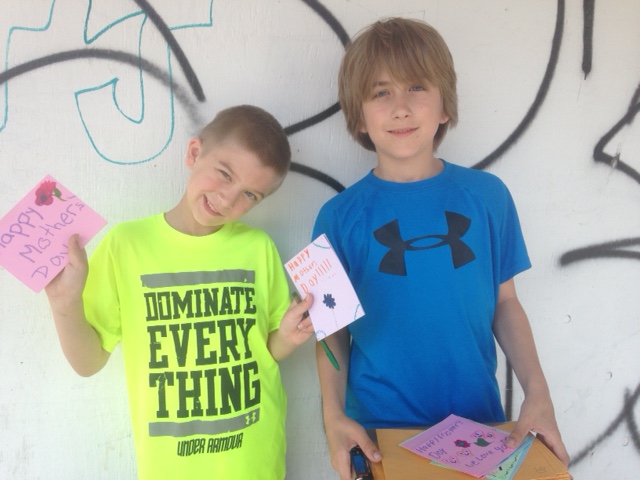 When Project HELLO (Helping Everyone Locate Loved Ones) began in 2009, our initial project centred around Christmas.  In the spring of 2010, a non-profit organization in Hawaii learned of our project and phoned to say they were going to borrow the idea and start their version at Mother’s Day.  We loved the idea, and decided that Project HELLO  should happen twice a year.  Our elementary students make beautiful Mother’s Day cards and then we head to the streets to invite people from the Downtown Eastside (DTES) community to write to their mothers.  Usually I head downtown with high school students, but this year, when my own boys asked what I wanted to do for Mother’s Day, I invited them to join me on the streets, helping others reach out at Mother’s Day. 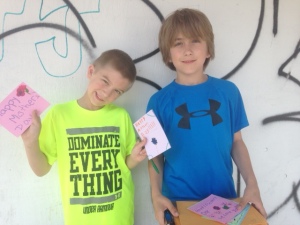 Yesterday, I spent my afternoon with my two sons, Jaden (age 10) and Cole (age 8) on East Hastings Street inviting people to think of their moms and send Mother’s Day cards.  It was a magical hour, where I got to see my own boys bring light to the darkness on the streets.  Just their presence on the drug ridden sidewalks shifted the tone.  As common practice, those living in the community yell “Kids on the block” and behaviour subsides.  Drugs are hidden, language cleans up, and the community shows an extension of care. Despite the roughness and harsh realities of street life, there is a still an appreciation for the innocence and joy of childhood. 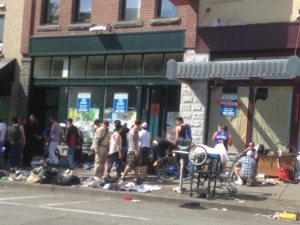 As we walked down the crowded sidewalks, we said hello, smiled and asked if we could help anyone send Mother’s Day cards.  Many told us of moms who are no longer with us, and many beamed with pride as they told us they had already thought of their mom and mailed a card.   One by one, those who struggle to stay connected reached out and asked if they could mail a card.  Jaden and Cole held the clipboard, cards and pens and helped people choose the perfect gift.  After heartfelt words were written, we promised to do our best to find their moms and mail the cards.  Touched by the kindness of children, the homeless wanted to give back.  One man offered each boy a nickel, which led to a ripple effect, where many of the homeless offered my boys small change.  The thought of taking money from the homeless seemed wrong at first and I began to object but stopped myself as I realized that their gesture was just as important as ours.  They had the opportunity to give to a child, and that satisfaction was worth more to them than their precious change for their next meal.

Today I had the perfect Mother’s Day morning.  After waking up to mother’s day gifts and hugs from my boys, I got to make phone calls to mom across the country, surprising them with Mother’s Day messages from their grown children: grown men and women whose addiction and shame paralyzes their ability to reach out regularly and express their love.

I am particularly moved by two phone calls this morning.  The first call was to a mom in Porcupine, Ontario from a man named John.  I first met John in 2009 as he was one of the first five people to write a card when we began Project HELLO.  I remember finding his mom that Christmas and listening to her explain the struggles of when to send money and when to stop.  Listening to her cry six years ago helped me recognize the pain mothers feel when they lose their children to the streets.  When I reached John’s mom this morning after a series of wrong numbers, I said hello and asked if she had a son named John.  In shock she started to cry and screamed “No – don’t tell me”. Her sensitivity to Mother’s Day, and constant concern for her son’s life made her fear the worst.  Seeing BC on the call display scared her  and she thought for an instant she would be learning of John’s death on Mother’s Day.  I re-introduced myself and explained why I was calling this particular Sunday morning.  As panic subsided, we were able to have a heartfelt conversation about John, his life, and what it’s like to worry about a son with addiction. A son who has survived Vancouver streets for 22 years.  The emotion of Mother’s Day was lightened by the knowledge that her son is alive and still thinking of her every day.

My second call was to Rhys’s mom.  Rhys too struggles with addiction but tries to stay in regular contact with his family calling every month.  When I explained I had the card, this mom was particularly accepting as she had read about Project HELLO in the newspaper and therefore didn’t question the legitimacy of the phone call.  Through tears she asked how her son was doing.  I was able to share with her that he was my boys’ favourite person that they interacted with yesterday.  When they asked his name, he smiled and said “Rhys – like the peanut butter cup”.  Rhys stood alone on the streets, and seemed gentler in nature than many in the neighbourhood.  He was polite, funny and kind to the boys, and yet you could see that the drug use has had an impact on his processing speed.  It took him time to think about his answers, and you could see the struggle to access memory.  And yet, despite his struggles, he wrote a beautiful card to remind his mom that he loves her.  Rhys’s mom and I had a beautiful conversation about loving our children.  As a parent she feels like she is grieving every day, as the son she occasionally sees or hears from now, is not the son from his childhood.  As a parent she loved her child, watched him graduate from school and thrive in life until his twenties when he experimented with riskier friendships and drug use. She has done everything she can to reach out, stay connected and remind Rhys how much he is loved.  Through Rhys’s act of mailing a card, he too is able to express his love this Mother’s Day.

Thank you to the courageous moms who opened up and shared their stories with me.  Despite our different circumstances, we share a bond, understanding the tears, joy and unconditional love of motherhood.