I had the pleasure of speaking at the Women’s Collaborative Hub 2017 Women Influencer Awards on Thursday evening.  It was an amazing event celebrating women in our community.  Who is your hero? Sometimes it those right around us that have the greatest influence. Here’s what I shared that evening:

Good evening.  Thank you to the Women’s Collaborative Hub for inviting me to be here.

Brene Brown says that stories are data with soul.  Tonight, I will share some data – through stories of five women who I would call unsung heroes.  Women without fame, but women of influence.   Women who have shown me that it’s our simple actions that can make the biggest difference.

Like many of you in the room, my mom is my first unsung hero. She raised my brother and I in Coquitlam as single mom, and like me, my mom was a school principal.  She often worked three jobs, volunteered, connected the community and make it look effortless (she still does today). 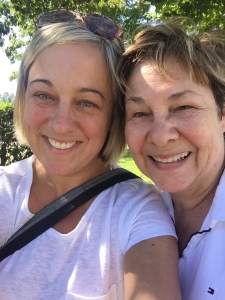 I’ll fast forward to my adult life, and why I was invited to be here this evening.

In 2009 I accepted a job as vice principal at Dr. Charles Best Secondary.  I had the pleasure of working with a woman who is here tonight – Mary O’Neill.  Mary is my second unsung hero.  Together, we were the perfect combination.  Mary was a respected knowledgeable principal – and I was a rookie VP with crazy ideas.  We quickly ‘clicked’ and Mary let me in on a secret.  She told me I was her “inside voice”.  Basically that meant I had permission to run with wild ideas, to create, to try things, and if need be – to fail.  And believe me – not all my ideas were good.  If you have time later, ask her about the time we tried to line the field for an aerial photo shoot using just masking tape.

Luckily, some of my other ideas were better.  In November of 2009 I decided that I wanted to take our students to the DTES – but rather than giving handouts – I wanted our students to give the homeless the power to give.  I wanted to create blank Christmas cards and invite the homeless community to write to people they had lost touch with.  I ran the idea by my mom.  She thought I was nuts. And so, I did what I always do when my mom says no – I asked someone else.  I asked Mary.  She told me to go for it.

That was the beginning of what we call project HELLO. HELLO stands for Helping Everyone Locate Loved Ones. What was supposed to be a one day fieldtrip, spiraled into an ongoing project this is now in it’s 9th year.

To date we have helped over 500 people from the DTES and tri city shelters reconnect with family and friends through cards, phone calls and face to face reunions.

When I think of the hundreds of people I have met on the streets, there are 3 women I want to tell you about tonight. They are my next 3 unsung heroes.  Each of these women represents one of the core values of the Woman’s collaborative Hub: connection, collaboration and communication.

Sandra Bonneau is the very first woman we met in the DTES.  Standing at the corner of Main and Hastings, she smiled at my nervous students and decided to write a card to her long lost daughter, Samantha, who she had not seen or heard from in over ten years.

Our students then returned to school and began phoning everyone in Alberta with the last name Bonneau.  After just two days and a series of wrong numbers, they were successful in finding Sandra’s daughter.  Samantha was overjoyed as she did not know her mom was still alive.  The women were eager to see each other but did not have the means to do so.  Our students began to fundraise, and coordinated our first face to face reunion, letting the women re-connect.

For years to come, Sandra helped keep our students safe.  She made sure that those who do not like guests on Hastings Street knew the value of our work and knew to look out for our kids.  She was called little mama by the people of the streets, and until her death in 2015, she was considered the heart of the DTES community.  She was a caregiver, a protector and a survivor. When she passed away,over 100 people from all walks of life came together to remember a hero who connected the citizens of our darkest neighbourhood.

In 2013, our project took a new turn.  We began to realize that each person writing a card had a very emotional story, and 5 minutes of card writing wasn’t enough time to hear it.  And so, we switched gears and launched what I call Beyond HELLO.  As often as we can, students and I visit the DTES and invite one person to go for lunch and share their life story with us.  I then blog about the experience in hopes of changing the perception of homelessness.

The next two unsung hero’s I would like to tell you about are both women I met while going Beyond HELLO.  Cynthia and Cindy.

Cynthia comes from the Toquaht (toe-kwat) Nation, located between Ucuelet and Port Hardy. Raised in a family struggling with alcoholism and abuse, Cynthia’s favourite childhood memory is of the nights when her grandmother couldn’t sleep so she would wake Cynthia to pass along stories. One night, her grandmother told her it was time to escape. Cynthia left Toquaht and headed to Vancouver, where she tried to help her younger sister who had come to the DTES at 13.

One night,  to help pay her sisters debt, she turned her first trick.  She shared with me her story of shame she felt.  Eventually, she turned to drugs to mask her pain. She holds onto a dream of one day returning home and opening her own flower shop – but she is conflicted, as she made her grandmother a promise to never return.  Five years ago Cynthia put herself through rehab but she made a commitment to stay and help others women in the DTES. She walks the streets smiling knowing that beauty exists in the shadows.  Her protective nature and collaborative spirit helps other women find hope.

And finally, I need to tell you about my final unsung hero. Cindy was the first woman I met when I decided to go beyond hello.  On a warm afternoon, I was handing out water.  I was an inconvenience to Cindy as she had planned to kill herself that afternoon by jumping in front of a city bus. She was battling HIV, Heppatitius and Heroin addiction.  At lunch, she spoke about wanting to die, but also about her one reason to live.  As a teenager living in Ontario,  she had given up her baby for adoption. 25 years had passed yet it was still her biggest regret.  All she knew was her daughter’s birthdate and her first name.

That evening I spent endless hours on Facebook looking through profiles of every person named Paige in Ontario that I could find.  One profile stood out.  To this day, I have no idea why.  It was a woman named Paige, of the right age, who had not been active on FB for a year.    I clicked her friend list and found a guy who looked responsible.  When I clicked on his profile It popped up that we had a mutual friend – Aaron Robinson (Selina Robinson’s son).  I contacted Aaron right away and he let me know that the guy I had clicked on was his university friend who had gone to elementary school with Paige. Within a few hours, Paige was at the other end of my phone explaining that she had been searching for her birth mother.  I let her know that the news may be hard to hear as Cindy lived a rough life in the DTES.

Paige didn’t judge – in fact, she knew of the neighbourhood as she had strugged with her own addiction but had found solace in a book by Dr. Gabor Mate entitled In the Realm of Hungry Ghosts – a book written about residents of the DTES. Paige let me know that a character in the book named Celia had inspired her to get clean – so much so that she had written to the author to thank him for sharing Celia’s story.

I returned to the streets excited to find Cindy and let her know we had found her daughter.  I asked Cindy if by chance she had ever met Dr.  Gabor Mate.   She looked up at me and said “You mean – in the realm of hungry ghosts? – that book is about me – in the book, my name is Celia.

Without even knowing it, Cindy’s ability to communicate and share her pain had inspired her daughter to get clean.  Knowing Paige was alive and well, Cindy checked herself into rehab.  On Mother’s Day of 2014 I was able to introduce the women to each other for the first time since Paige’s birth. 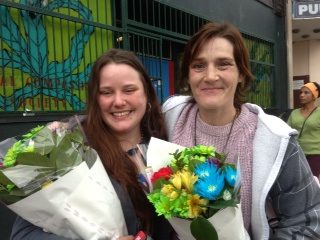 Where is she now? Well just last week she phoned me to cancel our dinner date as she was exhausted.  Why? For the first time in over 20 years she is not only clean, she is working full time. Cindy’s courage to communicate in her darkest days helped her heal her soul.

Sandra, Cynthia and Cindy are my unsung heroes.  They are my constant reminder that each one of us has the power to connect a community – and that it’s the smallest acts that make the biggest difference.  Everyone of us has a story worth hearing.

It’s been my privilege to give voice to their stories.  Thank-you.