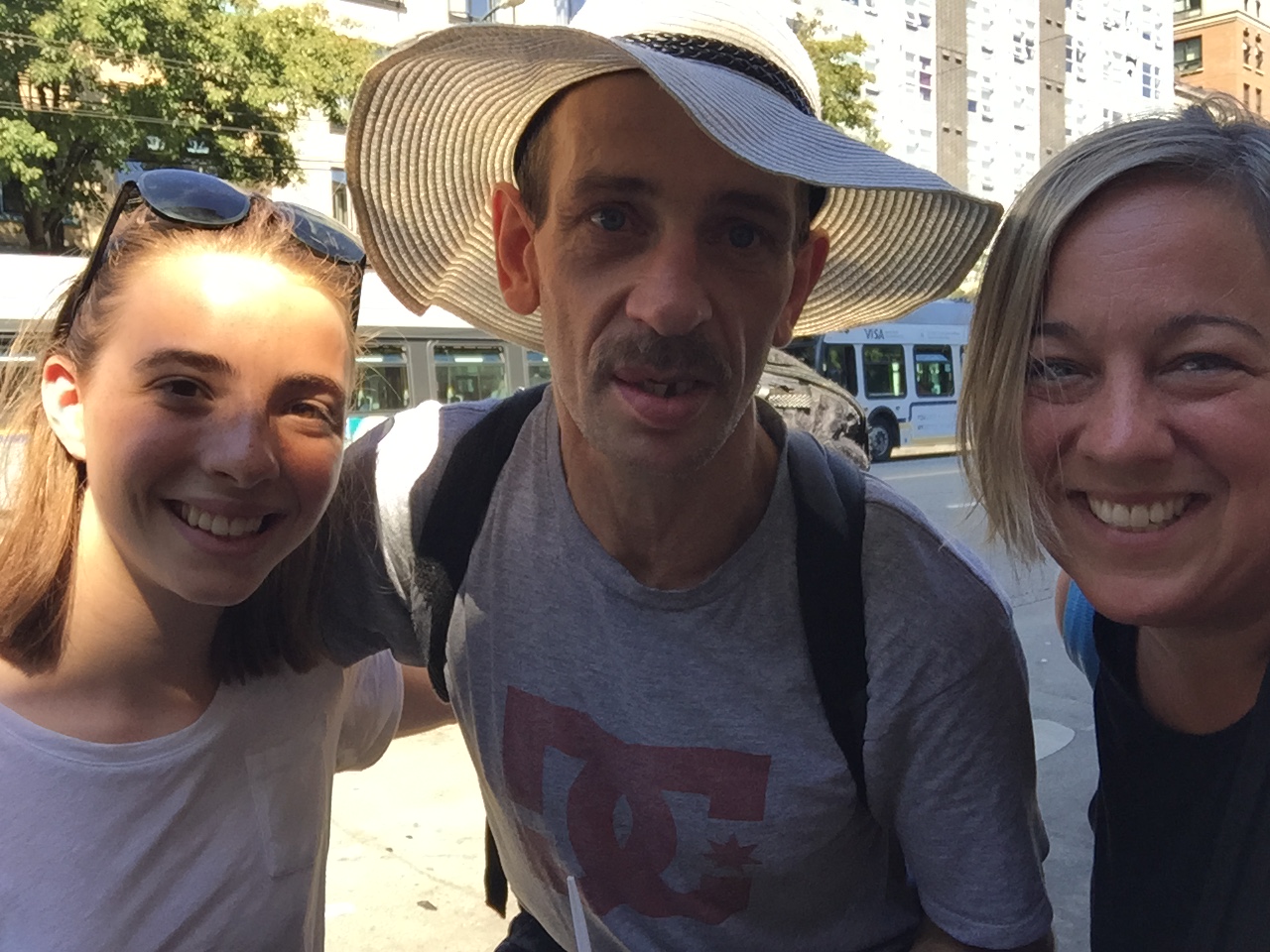 There’s something different for men who live on Vancouver’s streets.  They are trapped with guilt and shame that prevents them from repairing relationships. Living in pain, masked with addiction, is an easier choice than reaching out to loved ones.

Over the last decade I’ve had hundreds of conversations with members of Vancouver’s homeless community.  While men and women have shared their stories and told me about their past and their loved ones, their responses are different when their families are found.  Here is what’s different:

When I return to the streets, women reach out and ask if I’ve found their family. Did their mom receive their card? Did we find their sister? What did their daughter say? How can they be in touch? The women who are willing to send a card to a loved one are also eager to make phone calls or meet face to face.  We have used our cell phones for women to make their first call and flown women together to meet. While the women often regret their past, they are eager to say I love you and hug their loved ones.

The men are different.  In no way do I believe they feel less. However, it does feel they are less able to forgive themselves.  Men are often willing to write cards – especially to their mom or their children.  They want us to send thoughtful notes reminding their family they are loved.  They will often ask me to pass on messages or to search for them. The difference is when we find family.  Time and time again, families are overcome with emotion and want to speak to their son / dad / brother.  And time and time again when I return to the streets to share this news, the men can’t take that step. They want to know what their loved one said, want me to once again tell their family they love them – but in all the times I have offered, I can only think of one man who used my phone to say hello. I didn’t understand this for a long time. Perhaps my frustration comes from my own experience with an absent father who didn’t reach out.  Only recently have I come realize that many of the men I speak to think they are putting their family first by staying away. They feel responsible for their choices and the shame they feel prevents them from re-connecting. They often feel their family is better off without them.

Ron Wilson sat on a park bench for years. Each time I would visit he would light up and ask about his daughter Jennifer.  Jennifer and I are the same age.  Ron would open up, tell me his stories, ask me to send love her way, and would tell me he loved me when we parted ways. It was like he displaced his love as it was easier than saying hello.  His family tried over and over and I repeatedly wrote down their phone numbers for Ron.  He kept saying he would find the courage to call. Unfortunately he passed before he called Jennifer.

Today, Kaelen (grade 11 SD42 student) an I met up with my friend Lawrence.  I was delighted to tell him we found his sister.  His eyes teared up and he could not wait for me to read his sister’s message.  But he couldn’t call.  Once again, shame stood in the way.  However, shame wasn’t the only emotion at play. Today, Lawrence decided to show us that chivalry is not dead on Vancouver’s Downtown Eastside.

We arrived at Lawrence’s shelter around noon. He wasn’t expecting us, so when we knocked on the door he asked if he could have a few minutes to tidy up.  He asked us to wait in the hallway.  We obliged.  Through the door we could hear intense scurrying and the sound of a hand held vacuum going on and off.  Fifteen minutes later, the door opened and Lawrence invited us in as his guests.  (When I say invited us in, I mean he opened the door with 1 square meter of floor space and gave us the tour from the doorway.  He was proud to show us his place; a residence the size of your average bathroom.  I couldn’t see a bed.  I assume it was under the 5 foot pile of stuff.  Country music played, cowboys hats were stacked on a high shelf, and multiple bags and suitcases leaned against one another holding his life’s possessions.  As I introduced Kaelen, I mentioned that she is a cyclist.  With pride, Lawrence removed a few sheets draped over piles and eagerly bragged about his bike collection.  Somehow, in his tiny space, he has a few bikes.  He brought his ‘Gary’ bike to the hallway to search for the date stamp. He taught us about Gary Fisher bikes and gave us a quick history lesson on the evolution of mountain bikes. 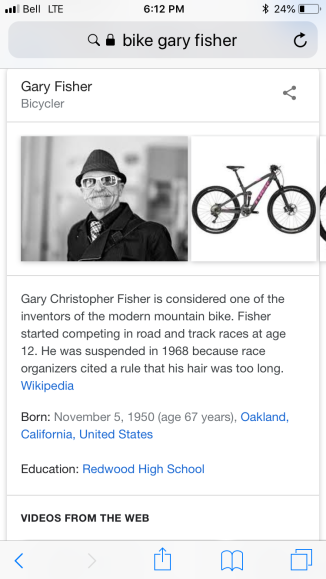 Lawrence had been up for days.  Sleep deprived and hungry, he wanted a few more minutes to wash up before joining us for lunch.  He needed sleep, but since we had found his family for him and he wanted to do his part repaying us. He asked if he could meet us in 15 minutes outside the shelter.

Lawrence emerged in his best clothes. New jeans, a fresh shirt and Australian hiking boots he had purchased on the street for five dollars. He offered to bike ahead and check if his favourite restaurant was open. He asked us to stay put so he wouldn’t waste our time.  We smiled and watched his bags while he biked up and down Hastings. After confirming that both the Ovaltine Cafe and Save-On-Meats were closed due to the holiday, Lawrence asked if he could take us to Prime Time Chicken on Main. We politely  agreed.

I’m embarrassed to say it was a struggle.  The restaurant looked like food inspectors had gone on strike or somehow missed this stop for a decade.  In 30 degree heat, the restaurant offered little refuge and the food under the heat lamps looked like it had been there all week: a mix of chicken, fries, fish, Chinese food, macaroni soup and lasagne. The owners were eating lunch as well – I took note that they had brought food from home in tupperware rather than consuming their own cooking. Lawrence ordered a plate of Chinese Food and asked us to pick something.  Sensing our trepidation, the owner let me know the fries were fresh.  I said ok and asked for the fries – trying to be respectful.  Our cans of pop were dirty and to be honest, the fries tasted like chow mien. (I like chow mien – just not disguised as fries) The ketchup was stale (I think it was ketchup).  I tried not to insult Lawrence and slowly ate some fries while he had his lunch.  I assured him they were good.

During lunch Lawrence gave us the inside scoop about life on the streets. He spoke about those he can trust and those he can’t.  He blames the alcoholics and heroine addicts for ruining the streets. An addict himself, he is off the needle. Despite his progress, he cannot tell me where he wants to be in five years as six months feels like a big goal for now.  He spoke about life in a shelter, his thoughts on the Portland Hotel Society, and how buying and selling of goods works in the neighbourhood.  He asked if we had been to the mall.  I told him I am familiar with the block where people sell their goods (some stollen some not). I asked who shops there.  He talked about the people who drive to Hastings Street to get goods at cheap prices.  I told him I wouldn’t be comfortable buying stolen goods. He looked at me like I was crazy and said “Who is going to know? Just me, myself an I.”  He tried to convince us that the bargains make it worth it and that we are crazy to spend more elsewhere.  He asked if he could take us shopping assuring us we would love the experience.  He reminded us never to settle for the first price offered.

The ‘mall’ is the block I usually avoid.  Selling is the focus and there is a tension you can feel as people protect their goods – all eager to earn a buck.  The street is incredibly crowded – like Metrotown on boxing day – with an eclectic mix of items: brand new camping equipment, clothes, shoes, new hats, computers, phones, flats of strawberries and a strange collection of Costco deli items…. meat, pasta, shrimp and seafood sauce – all nicely displayed on the hot sidewalk.  Lawrence introduced us to vendors, all who politely said hello. He was proud to tell his buddies on the street that we were his friends and he was our tour guide.  He kept saying with surprise “They have never shopped here before!”  Despite Lawrence’s encouragement, I could not bring myself I purchase any of the products.  One particular man looked like he was struggling so I offered him some change.  Lawrence, wanting to be our host, mirrored our actions and offered the same man some money.  It was clear all afternoon that Lawrence wanted to show us he could take care of us as his guests.

We took some photos and I sent them to his sister.  He asked me to point out that he hates his hat.  A cowboy at heart, he kept telling us his hat lacks starch.  His sister instantly replied and confirmed it’s a dorky hat.  He laughed, impressed with her banter. She sent her phone number should he wish to call. 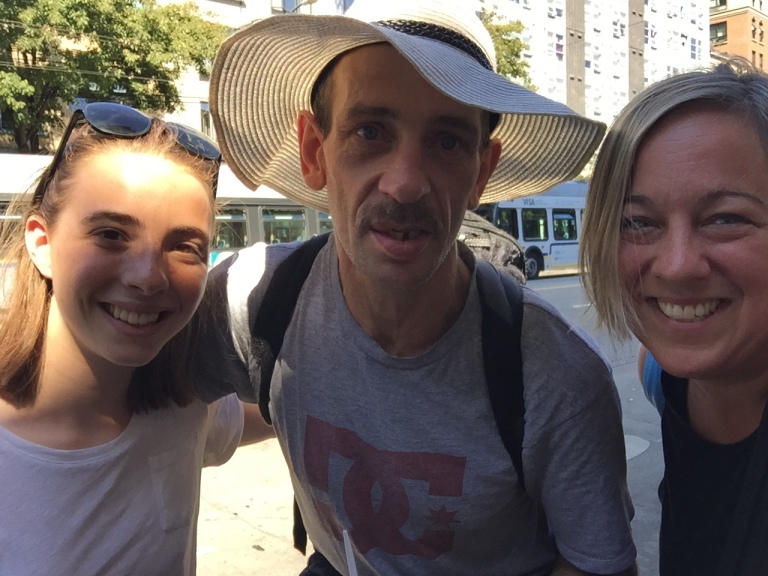 I asked if he was ready.  With a look that said it all, he smiled and said ‘Nah’.  Like most men on the streets, that step is better kept for another day.  Chivalry and shame is enough for today.

One thought on “Chivalry and Shame: The Men of the DTES”