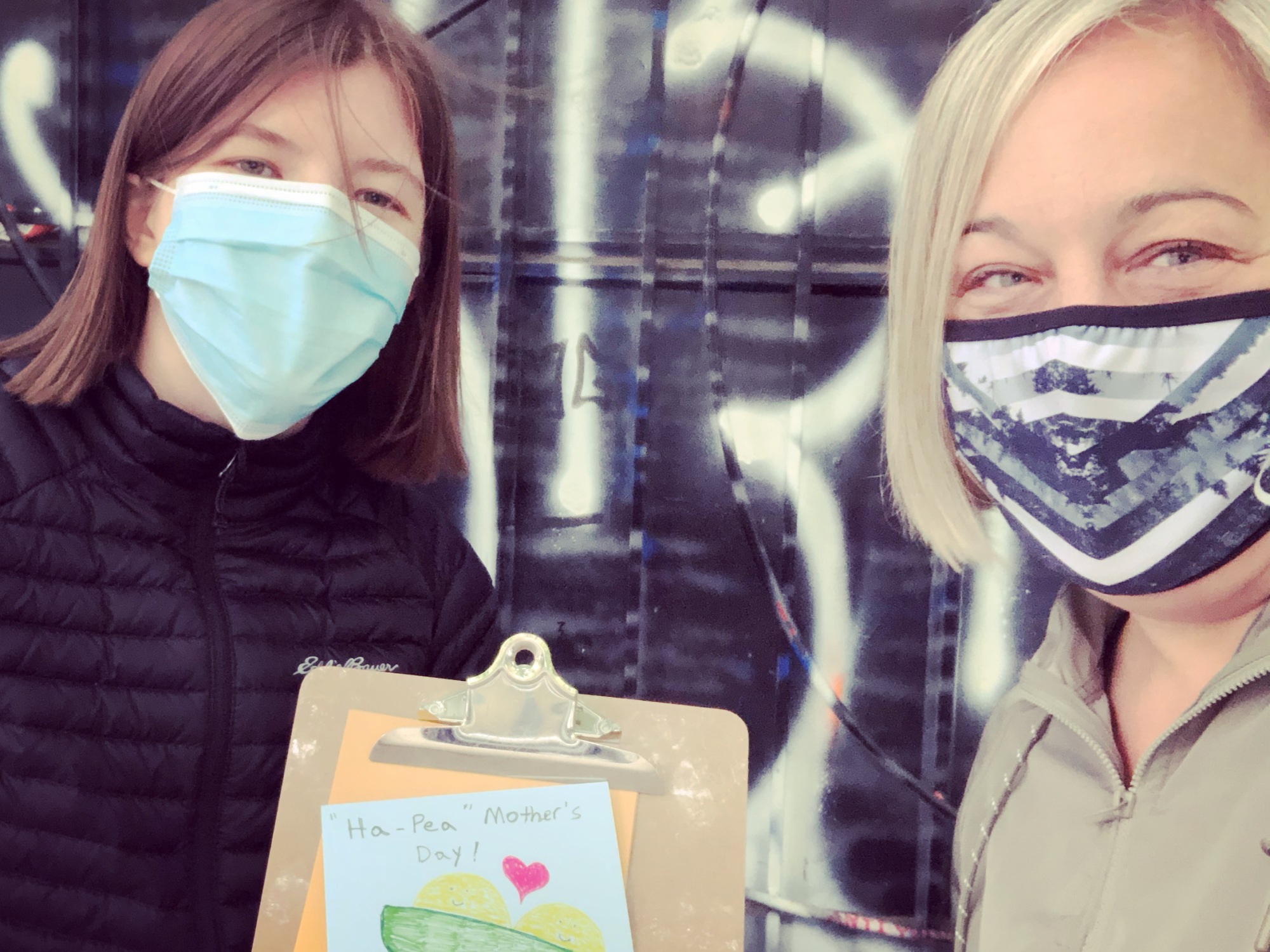 Earlier today, Sophia (Maple Ridge graduate) and I headed to the streets with blank Mother’s Day cards so we could invite the DTES community to reach out. Hastings Street is not as it once was. Today was the worst I have seen it in over ten years.

COVID-19 has inconvenienced all of us, but it has devastated our poorest neighbourhood. Stores and restaurants are boarded up, services are closed and thousands of people crowd the streets – some in doorways, some wandering aimlessly and many lying across the sidewalks in a trance of mild consciousness. To quote Sophia, “Some look as if they are waiting to die.” The energy was heavy, stress levels high and the street lacked it’s boisterous nature. Most had the same expression – loneliness, pain and a lack of hope. We wondered if anyone would accept our offer to write to their mother.

We navigated our way up Hastings Street making eye contact and smiling at anyone who looked coherent. Most refused our offer but thanked us for our work. At the corner of Main and Hastings we found light as ‘Mamma Marcy’ sat side by side with friends, selling cigarettes. A small speaker played music and infused life into the neighbourhood. Marcy asked if she could write to her mom. She chose a card her mother would like and carefully wrote these words:

She then explained her mom had long since passed but she still thought of her on Mother’s Day. As we spoke to Marcy it became clear she was the mother of the neighbourhood as younger men and women would check in with her as they passed by. We chatted about the dry weather and I mentioned it was rainy in Maple Ridge. Marcy let us know she had grown up in Mission and was forced to attend St. Mary’s Indian Residential School. I let her know I was a school principal and apologized that she was forced to go to a school that stripped away her culture. In a humble voice she replied “It’s ok – it wasn’t that bad – if you were good all week you got to see your family on the weekend.” Marcy graduated in 1983. St. Mary’s was shut down in 1984 and staff have since been charged with multiple counts of abuse.

Marcy explained she sells cigarettes and uses the money to buy name tags from a dollar store in Chinatown. She makes name tags for the community so first responders can identify those who overdose but do not have any ID.

Sophia and I crossed to the south side of the street hoping to make more connections. The south side had an ounce more optimism as many sat in silence along the cold concrete. Over the next hour ten people accepted our invitation and wrote to their moms.

Howard wrote an apology to his mom asking her to forgive him for his choices, pleading for her to remember he loves her and misses her. “I love you and miss you. I wish we got along better. Maybe someday we will. Love your son, Howard.”

Dayna promised to try and change for the better:

Matthew sat alone in his wheelchair reading Ageless Body, Timeless Mind by Deepak Chopra. When I asked if it was a good book his eyes lit up and he confirmed it was. He took time to write his card thoughtfully and intently. Unsure of his mom’s address, he used my phone to search google maps. With no luck, I suggested we call her. We tried, but it was the wrong number. The shame was instant, unable to remember his mom’s phone number. A minute later in deep thought, Matthew had an idea – he could call his sister to get his mom’s number. I called his sister to see if she could help. She was elated as she had searched for Matthew and had not heard from him for three long months. Three months is a long time for any family to go without talking, but it’s much more stressful when your loved one resides on Hastings Street. In the first three months of 2021, 498 people have died from overdose in BC.

As I crouched beside Matthew, Sophia made her way a few feet past me to speak with a woman named Nadine. Nadine was hesitant wondering what Sophia was offering. When Sophia explained we had cards to send Mother’s Day messages Nadine accepted. After a pause to gather her thoughts, she wrote to her mom and suggested we could find her on Facebook.

Returning home, luck was on our side. We found all ten moms this evening and their cards are ready to be mailed. I searched Facebook for Nadine’s mom. As luck would have it, we had a mutual friend – a co-worker from the past who was able to help me connect. Nadine’s mom was in tears, explaining she has adopted her daughter’s three children and that she never gives up hope for her daughter. Our card from her daughter has made her Mother’s Day, and her words back have made mine.

May we all connect with compassion. Happy Mother’s Day everyone.

4 thoughts on “Missing Mother’s Day: Cards from the Downtown Eastside”