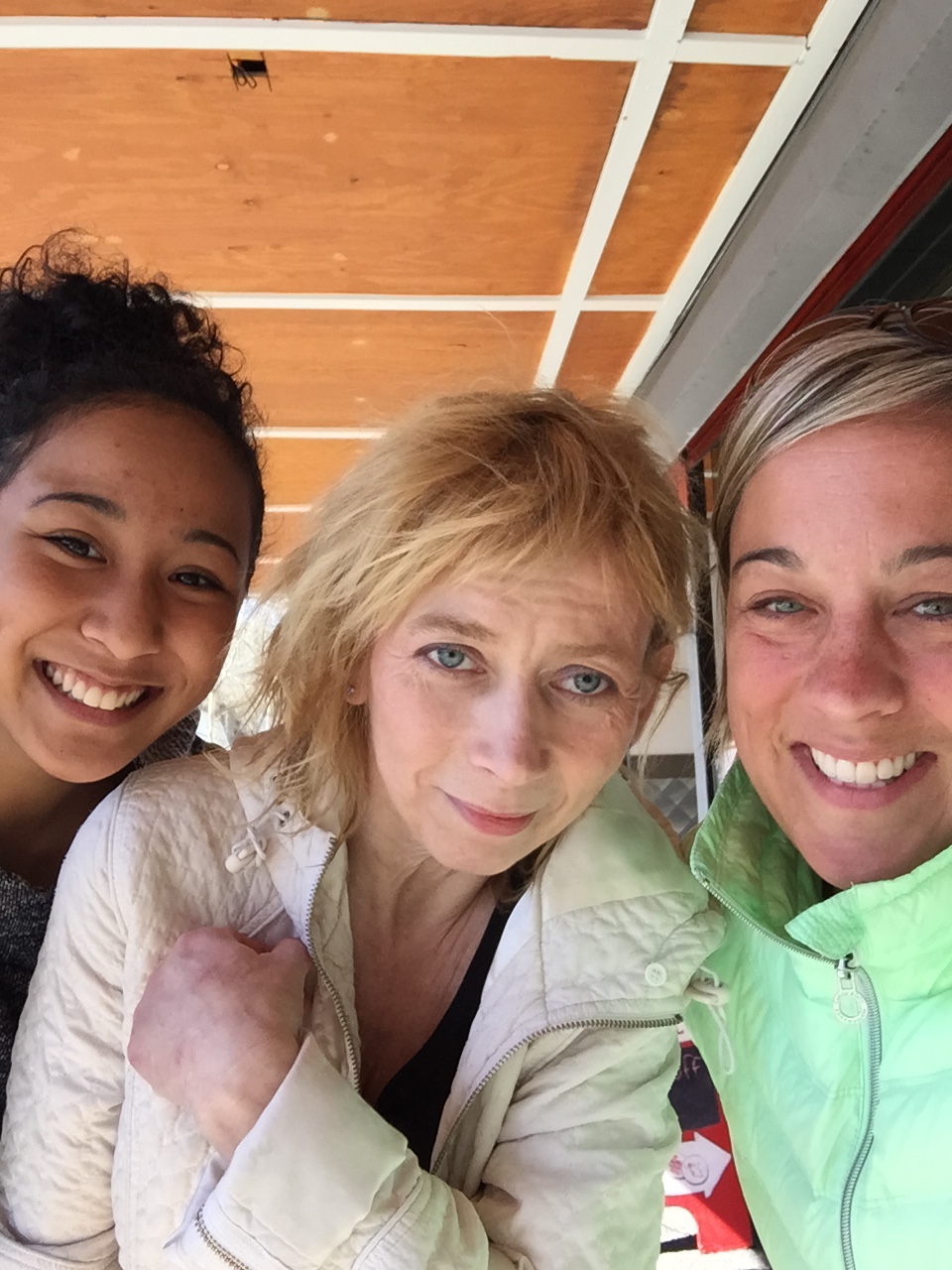 The thick caramel sauce dripped in slow motion from Monica’s sundae spoon as she told her story.  The growing puddle on the table seemed irrelevant compared to her words, and the look in her eyes made it clear that the memory she was re-playing was more vivid than anything in front of us.

Twenty minutes before this, Monica was out for her weekly walk through the Downtown Eastside Sunday market; a cornered off street crammed with vendors selling a range of items: old clothing, cigarettes, fresh and not so fresh foods and a collection of used or stolen goods.  Aisles were crowded with the homeless population of Vancouver all out for a day of trade.  Amongst the buying and selling, security evicted vendors unwilling to pay the $1 rental charge.  The expression of most market goers suggested purpose – a day about survival and profit.  Monica seemed different.  Small in stature, and dressed in a mini skirt, nylons and bright blue clogs, she shivered under her white jacket.  With her hood pulled over her head, she clenched a small bag of belongings and looked at displays with polite interest.  Her kindness and mild manner caught my attention so I suggested to Jas, a grade ten student, that we approach and offer Monica the chance to sit down and have lunch.  I tapped Monica on the shoulder and explained that we were just about to go for lunch and would love for her to join us. “Me? You choose me to ask? No one buys me lunch – um – sure, why not – yes – ok I would love to come.”  After exchanging names we were on our way to my favourite restaurant in the DTES, Save-on-Meats, a place where everyone is treated with a warm welcome and acceptance. 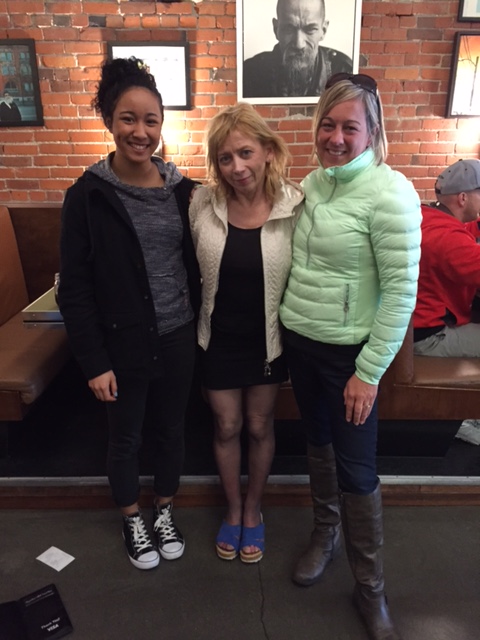 Monica showed interest in us and was pleasantly surprised that we would drive all the way downtown just to ask someone to go for lunch.  I explained Beyond HELLO and our desire to help in a different way.  Monica loved that Jas was a student, and asked lots of questions about high school these days.  She mentioned she has moved many times in her life – commenting “now that’s how I got an education!”  I agreed that each new experience offers authentic learning.

We invited Monica to order anything she wanted from the menu.  She loved the idea of a great big dessert followed by a grilled cheese.  I told her I loved the way she planned her food around the dessert.  When the waitress asked if she would like her dessert last she shook her head no with slight bewilderment… why on earth would she want to wait for a great big ice cream sundae?  Good question – and one that those of us living with enough to eat don’t have to ponder.

So – what brought Monica to the DTES of Vancouver?  I started by asking how long she had lived in the neighbourhood.  Like many, her dates are foggy but she believes about 20 years.  Monica told us she was 47 years old.  Minutes later she corrected us and said she actually has no idea how old she is – she celebrates the day but doesn’t count the years.  She was born in Poland in 1968. My most accounts, her family was successful.  Her dad was an engineer, her mother worked in an office and they owned a condo and two cars.  At age eleven, her dad accepted a job in Athens, Greece at a friend’s business.  It was supposed to be short term.  Days after his departure Monica was hospitalized with abdominal pain.  It should have been a simple three day hospital stay at most.  Instead, following an appendix removal, Monica was infected by needles at the hospital and she progressively got worse.  Three months later, swollen yet skinny, her life expectancy was in question.  Her mom decided the treatment wasn’t working and took her from the hospital and travelled to Greece to see Monica’s father.  Monica felt as is if she was starving.  With not much to lose in her dire condition, her mother let her eat whatever she felt like.  She remembers eating grapes, chocolate, yogurt, cola and an occasional taste of her parents alcohol.  She stopped taking all her medication.  Bit by bit her health improved. With political unrest in Poland in 1980, her family lost their possessions and was not able to return home.

In her teens, Monica’s family immigrated to Edmonton.  Monica recalls the 9 month winters and 3 months of spring, summer, fall seasons.  She has few happy memories as an only child in Edmonton and loved learning they would soon move to Vancouver.

In Vancouver Monica married Tim and together they lived with her parents.  Tim’s addiction soon drove a wedge between them. Monica remembers trying to take her parents pop cans to get him the money he needed.  The marriage eventually ended in 1998 and Tim returned to Alberta. He overcame his addiction and became the manager of a Homeless & Addiction treatment centre.

The worst was yet to come for Monica.  Monica paused to tell us she hasn’t talked about this much before. She asked if Jas and I had ever had an experience that we know is real but it seems like a dream because it’s too horrible to be real….   Losing interest in her sundae, and staring straight ahead she told us the details of a day in her 30’s where she was in the shower and heard an altercation in the living room.  The words and sounds didn’t make sense.  She knew it was her father’s voice but it was a side of him she had not seen or heard before.  She found her mom dead in the living room.  Paramedics tried to revive her without success.  To this day Monica doesn’t understand why her dad wasn’t charged. No one interviewed Monica about what happened.  What was ruled a natural death was anything but natural for Monica.  She continued to share a residence with her father for one more month until he tried to strangle her.  It was the tipping point, where homelessness became the more desirable option.

For almost 20 years, Monica has lived in the DTES.  She has been drugged, robbed, sexually assaulted and physical assaulted. She talks about abuse in her sleep and waking up with bruises.  She believes someone is there (though knowing her story I would assume that sleep is when she re-lives her trauma). Despite the adversity she finds beauty: a few close friends, the sunshine and the beauty of the city.  She is not jaded: she finds the good in people. The community is her home and it’s where she feels accepted. Gentrification of the neighbourhood bothers her.  It’s not the development that bothers her – it’s the attitude of elitism.  As Monica says, she has travelled, she has been new to a place and she believes we are all equal. No one is better than another person.  She has no tolerance for racism or prejudice.  She believes we are meant to co-exist and form community.  She looked at Jas and I and said “Our hearts are the same. It’s only in our heads that we are different.”  I asked if we could stop so I could write down her quote as I couldn’t agree more.  She smiled and blushed as we complimented her on her wisdom.

After offering us her fries, and engaging in conversation about all our families, Monica requested a take out box for her leftover food.  I asked where she thought she would be in ten years.  “Oh, probably right here.  Unless I’m dead.  Some days I contemplate suicide, but nah – I don’t think I’ll do that.  Life’s too good for that”. 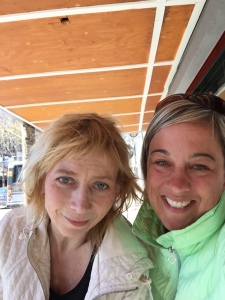